A Scandalous Christmas and its CHRIST 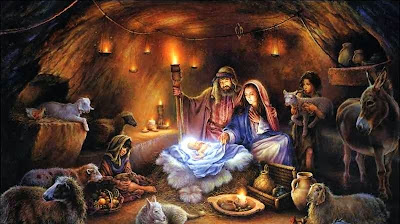 Who would have even thought that a story like this would ever get off the ground? But it did. And some people actually believe it.

Once upon a time, 2000 years ago, the invisible, eternal, Creator God entered into time and space and became a fetus inside of an unmarried poor Jewish peasant girl named Mary. She was engaged to be married to a blue collared carpenter named Joseph. Mary claimed the child in her womb was from God and that she had not been sleeping around but was still a virgin. No doubt in that highly conservative and religious community she was instantly rejected as a dirty sinner who had gotten pregnant outside of wedlock and really deserved death or desertion. Her reputation in that community would forever be that of an adulteress and fornicator. And Joseph, who could’ve easily found another wife decided to marry this pregnant Mary and become father to a child that was not his own. His reputation likewise would forever be tarnished having taken such a disgraceful woman to be his wife and an illegitimate child to be his son. And this was just the beginning of the perfect reputation of the earthly parents of the “divine” baby Jesus, who would eventually be born in front of an audience of animals; goats, donkeys, sheep, and oxen and all the wonderful smells that accompany such a sanitized environment as his mommy goes into labor. An illegitimate birth in an illegitimate place to a couple of poor Jews. But I thought Jesus was a King! This kid is at a huge disadvantage before He’s even born! Right? Shouldn't He be born in a palace, in a popular town somewhere, to some wealthy noble couple of great religious and political reputation? And yet, here you have a couple Jewish nobodies, who claim their Son is literally from God, but they give birth to this “Special Child” in an animal cave, a barn practically, in the middle of backwoods Bethlehem. Then they run from Bethlehem because Herod the King has commanded mandatory post-birth abortions on all boys 2 years old and younger hoping to kill Jesus before He grows up and threatens his career.  Joseph and Mary raise Jesus in hated Egypt for a few years which is not kosher, and then they take him up north to grow up in a neighborhood in nowhere Nazareth where they have other sons and daughters.

Well, Jesus grows up in silence for nearly 30 years alongside brothers and sisters who don’t believe He’s anything super-special. He works as a blue collared carpenter alongside his dad Joseph as a young adult. Sometime when He’s around 30 years old he pops up on the scene near Jerusalem, following the crazy open air preaching ministry of His cousin John the Baptist, who dresses like an animal, eats bugs and yells at people to stop sinning. Jesus then does what every parent hopes their child will do, He leaves the hammer and nails career of a carpenter to be a homeless Gospel preacher. Except this Gospel preacher actually claimed to be the Son of God and Savior of the world. Kinda bold don’t you think?

Well, He carefully gathered an elite group of 12 followers that many actually considered to be losers; a motley-crue mix of fishermen, tax collectors, religious and political zealots, brothers, cousins; two handfuls of nobodies. And for the final 3 years of His short life He travels with these knuckle-heads, preaching in the streets, teaching in the Jewish synagogues, and on the countryside, healing sick people of diseases, casting demons out of people, and teaching His followers to love God, love people and follow Him sincerely.

Eventually this circuit preacher became a real threat to the “establishment” of the day. He ends up angering the religious and political leaders so much that they decide to have Him executed for being a blasphemous cult leader, who claimed to be God, but they were certain He was really demon possessed, practicing sorcery and leading a heretical rebellion against the nation and the true religion of Israel. This guy was causing problems for the status quo! He wasn't politically or religiously correct as far as they were concerned. He needed to be censored, even if it meant killing Him. He offended both sides of the isle. He wouldn't fit into their box and refused to play their games. Jesus offended both the religious and the rebellious. With His words He afflicted the comfortable and comforted the afflicted. Jesus always acted as if He was in total control, even when they were killing Him. He said He came from heaven to earth to die for sins, to save from hell, to rise again. He predicted His death, who would kill Him, how He’d die, and how He’d rise again on the third day. But even His disciples who lived with him for nearly 3 years didn't understand or believe it. He wasn't fitting into their box either. What is it with this guy? Why is He so different from every person that has ever lived? He washed the feet of His disciples as a slave would wash the feet of their master. When He hung on the cross naked He prayed for those who were killing Him. And then He died…

If the story ended there we would be fools to believe it. But on the third day, early in the morning, the tomb of Jesus was empty. Did someone steal the body? Did He even really die? Maybe they went to the wrong tomb? I mean, the documents say He rose from the dead and revealed Himself first to three women. And of course we know how valued a woman’s testimony was in that culture, right? Obviously I speak sarcastically. Why would He rise from the dead and show Himself to women first in a community that didn’t even regard a woman’s testimony as valid as a man’s. This story is backwards in every area! Who would have the hero first die for the villains, the sinners, and then rise from the dead to be seen by a few women in a man’s culture?  Did a bunch of women conspire to make this thing up? But wait, then He appears to His own disciples and they don’t even recognize Him at first. And when they see Him, they think it’s a ghost, and Jesus has to ask them to touch Him. He even eats a meal with them to show them He’s not a ghost. So you mean to tell me that even the “believers” didn't believe Him at first? Who’s writing this? Someone needs to doctor this thing up so that the disciples don’t appear to be so skeptical and unbelieving. Right? I mean who’s actually going to believe this stuff if the disciples come off sounding like your average, everyday ordinary people? But that’s what it says. The documents also say that after He rose from the dead He walked the earth 40 days, revealing Himself to people, telling them to go and tell others He is risen from the dead. It says He appeared to over 500 people at one time. Jesus’ own brothers, James and Jude, who were skeptics His whole life and thought He was crazy, became believers immediately after they saw Him risen from the dead. Doubting Thomas thought the other disciples were lying to him when they told him Jesus was alive from the dead. And finally even some of His own enemies saw Him alive after He had died and became followers. These nobodies, these losers, these skeptics, critics, cynics, these doubters became believers and eventually wrote down their eye-witness accounts of the life, death and resurrection of Jesus Christ. We have bound together their stories in what is now called, the Bible. And within its pages you can read the original Christmas Story, which is even more wonderfully scandalous because it’s historically true! That God became a baby to die for you!

Christmas is about CHRIST!      Do you know Him?

Jesus told a man, "Take heed and beware of covetousness, for one's life does not consist in the abundance of things he possesses." -Luke 12:15

Jesus also said, "What shall it profit a person to gain the whole world and lose their soul?" -Mark 8:36

Some other blogs I've written that may be of interest:
The Gospel
The Dishonest Skeptic
Do you take the Bible literally?
F.A.C.E.S.M.A.P. "Evidence the Bible is Trustworthy"